Predictability and variability of association patterns in sooty mangabeys 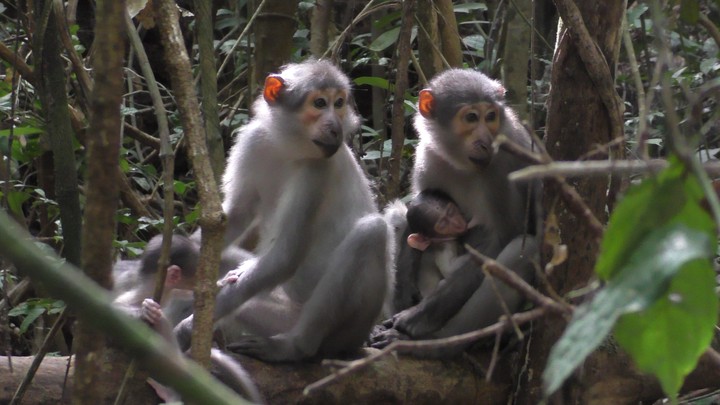 Now that everyone is talking about keeping association between people as small as possible, it feels good to talk about association in our sooty mangabeys, and our new paper in ‘Behavioral Ecology and Sociobiology’ (https://link.springer.com/article/10.1007/s00265-020-2829-y ).

Mangabey groups are fairly large; in 2014-2017, the time of this study, our group consisted of 50-70 individuals, give or take. The group moves through the forest as a whole, so usually we all end up in the same place; but that does not mean that you can see everyone all the time: the forest is dense, and the group is spread out, so while the group does not get torn into clear smaller groups, they are stretched out over a large area. Usually, when following your focal individual, you only see 5 or 10 other adults, and a whole lot of infants. This is very different from chimpanzees, where you usually know who is in your subgroup, because the community will fall into clusters during the day that stay the same over longer periods of time. In other monkeys, the whole group is always visible, so there are also no surprises.

This study started out as a pure replication of a study published in 2018 by Ramos-Fernandez et al (https://royalsocietypublishing.org/doi/full/10.1098/rspb.2018.0532). The authors tried to measure the complexity of different primate groups using entropy, an information-theoretical measure. Entropy quantifies how much information is contained in a system by testing how repeatable certain patterns are: right now, everyone is locked up at home, so you can predict fairly well whom you will see tomorrow - entropy is low. Once the lockdown is over, we will all run into the park and celebrate with anyone we see - entropy is high. The article showed that in primates with one-male units (geladas), entropy is low, because the members of the one-male units are consistently seen together. In primates with fission-fusion societies, like spider monkeys and chimpanzees, entropy is much higher, but association is not random: subgroups are predictable because they stay together in the same composition for extended periods of time, and individuals associate in the same small groups again and again. The study therefore created what appeared to be a highly useful measure to quantify how predictable it would be for an individual who is around when they interact with others.

Because the authors of the original study kindly provided the code to replicate the entropy analysis, and we have several years of association data available for the Tai mangabeys and chimpanzees, I simply plugged in our data to see how the patterns would look in the mangabeys. From our observations, we knew that there would be more chaos than in the chimpanzees; it is almost impossible to predict which mangabeys will be close to each other at any given point, and we knew had shown in a previous study that no two grooming bouts have the same audience. This would potentially create a lot of uncertainty for individuals living in mangabey groups: they are highly aware of their surroundings when interacting with others, watch their group mates, and intervene into their fights and grooming bouts. If an individual cannot predict who will be around at any given point, they constantly have to adapt to changing circumstances.

Our assistants collect visibility scans every 15 minutes; they write down every individual who is visible from the perspective of the focal individual they follow. Right away, the chaos that is the mangabey group becomes apparent: of the roughly 10,000 scans, more than 95% were unique combinations of individuals. Thus, almost no two scans ever contain the same individuals, even if they directly follow each other. There is simply too much movement in the mangabey group. And this ignores all of the infants buzzing around the group, which add to the confusion.

Not surprisingly, the entropy measure, which had worked so well for other primate species, came up as 1, or complete uncertainty, for all 3 years that we included in the study. So, knowing who is with your individual now does not help you predict the composition of individuals around in 15 minutes.

These results confirm what it feels like being in a mangabey group: you can never predict EVERYONE who will be around. However, movement in mangabeys does not seem to be random: if you are with a young male, it is almost certain that there will be other youngsters around, while you never see them when you follow an adult female. You also often see adult mothers and daughters together. So on some level, mangabey movements must still be predictable: after having been with them for a while, you know that Moremi and Ndoki will spend most of their time together.

So, to contrast the results of the visibility composition entropy, we also calculated dyadic association, and tested how kinship, rank, sex, having young infants, and age influence how much time individuals spend together. And behold: all these factors influence who associates with whom. So, while you can never predict all the individuals around, you can predict that seeing one mother with a baby means that other mothers with young babies are closeby. This is similar to humans: if you go for drinks with your friends every Friday, you will not know all the people in the bar; however, anyone seeing you can predict that your friends are also there.

Mangabey association works on two levels: the forest is dense, everyone is looking for food, so there is a lot of chaos as to who will be around. This does not mean that association is random though: on the dyadic level, rules exist, and an individual who knows these rules can make imperfect guesses about where to find someone they want to fight, or who the audience will be. Mangabeys therefore have to be extra vigilant: you can never rule out that an enemy lurks behind the next tree. These results also show us that measures such as entropy, that quantify the structure of social groups, can sometimes fail to grasp the reality of individuals living in a system, and need to be interpreted with caution.