Mangabey and Chimpanzee Cooperation and Cognition 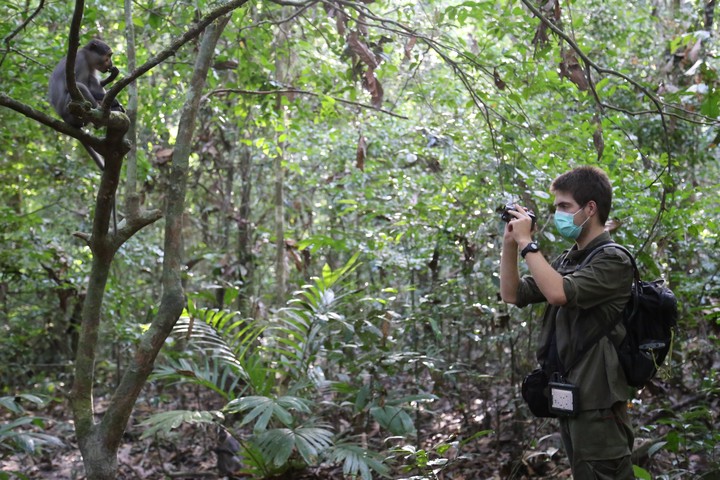 I spent three field seasons, from 2013 to 2015, in the Tai Forest, Ivory Coast, to study sooty mangabeys and Western chimpanzees and try to define what, if anything, makes chimpanzee sociality special, and what impact this has on cognitive abilities. While we know a lot about chimpanzee behaviour, sooty mangabeys had received little attention, despite living terrestrialy in large and complex social groups. Splitting my time between one chimpanzee and one mangabey community, I collected the same data in both species to enable us to compare them directly. Through collaboration with my colleagues Anna Preis and Liran Samuni (for the chimpanzees), and Jan Gogarten and Clement Gba (for the mangabeys), and with the invaluable help of the dedicated field assistants of the Tai Chimpanzee Project, we were able to illuminate previously unknown cognitive abilities in both species and shed further life on the way cooperation shapes their everyday life.

One result of the immediate comparison of the two species was that both of them rely heavily on their cooperative partners, and they make complex choices every day to figure out with whom to cooperate. They also protect their relationships against competition. Both chimpanzees and mangabeys select partners for grooming interactions out of a pool of available group members, and choose while considering a large number of characteristics at the same time: their rank, age, sex, whether they have a baby or not, their previous interactions with each other, but also based on who else is around. If friends of an individual are present, who are likely to disrupt the grooming interactions, that individual is a much less attractive grooming partner (Mielke et al. 2018). We later showed in chimpanzees that food sharing is similarly the results of a multidimensional choice based on partner characteristics and past cooperative interactions (Samuni et al. 2018). After having made such an effort to find someone to cooperate with, individuals in both species make sure that their friends do not cheat on them, by intervening to disrupt their ongoing grooming interactions (Mielke et al. 2017). Interventions are also used strategically to prevent close-ranked competitors from making new alliances. In a separate study on the hormonal correlates of reconciliation after fights, we showed that chimpanzees have a number of different ways to make up with their friends after a disagreement (Preis et al. 2018). Also, we could show that one reason for the importance of cooperation in chimpanzees is the competition between neighbouring communities, who fight over territory and resources (Samuni et al. 2019). The reason we find few differences between species in these studies is likely that all anthropoid primates are very attuned to their social environment, because living in large groups puts a lot of pressure on successfully processing information about other group members’ behaviour. While the skills of both mangabeys and chimpanzees in the cooperative context are among the most complex abilities found in any animal species, they likely only scratch the surface of all the calculations these animals have to make on a daily bases when it comes to coordinating their life with that of dozens of friends, family, and foes, who all have their own history and interests.

Despite all the similarities, the two species differ in some aspects. In an upcoming book chapter, we show that mangabeys’ social relationships are generally more stable than those of chimpanzees, likely because their friendships are based on rank and kinship, which are highly stable in sooty mangabeys (Wittig et al. forthcoming). The dominance hierarchy of female chimpanzees, which is highly stable in East African chimpanzees, seems to be more flexible in Tai: while rank changes are rare, they do occur and potentially allow females to jostle for positions of power (Mielke et al. 2019). Also, the way groups move around the forest is different between the two species and creates different pressures regarding group coordination and information transfer. Chimpanzees live in so-called fission-fusion societies, where the group is rarely together as a whole but splits up into smaller groups with changing compositions, spread over large swaths of the forest. When faced with extremely threatening paper-mache snakes, chimpanzees will remain close to the snake and call out when new individuals arrive, because this is the most accurate way to warn others of the threat. Mangabeys, who move around the forest in large groups that are generally cohesive, do not have to inform others personally: if you call when nobody else is close to the snake model, you can be quite sure that other group members can here you, are warned of the threat, and pass it on once they see it themselves (Mielke et al. 2019). We showed in a further study that mangabeys can probably never predict the exact the identity of everyone who will be close-by, because there is no clear subgrouping going on an any group member can be anywhere in the group at any time (Mielke et al. 2020, Animal Behaviour). This is very different from the stable subgroups of chimpanzees, and potentially makes it difficult for mangabeys to plan ahead. However, we also show that this problem is alleviated by the fact that mangabeys cluster based on age, sex, kinship, and rank: so, while I cannot predict which subadult males will be together at any given point, if I see one subadult male I can be reasonably sure that some of the others are not too far off. So while chimpanzees have an accurate idea about who is with them at any time, mangabeys have to make do with a probabilistic representation.

Recently, we proposed a new way of quantifying predictability in interaction choices in primates (Mielke et al., 2021): By repeatedly splitting the dataset and correlating interaction rates across splits, we can quantify how consistent interaction partner choices are. One of the basic assumptions of our data collection is that even though we cannot observe all interactions, what we do observe is a fair representation of the underlying interaction patterns. If different subsets of the data do not correlate, there are two possible explanations: we do not have enough data; or individuals distribute their interactions more or less randomly. Both scenarios rule a behaviour out for further analysis, because they are clearly not part of what we usually consider a ‘bond’ between individuals. In our paper, we show that despite using huge datasets (upwards of 6,000h for the chimp groups), there are not enough food sharing or coalitionary support situations to estimate underlying distributions, making it hard to predict what these interaction types mean for individuals. For those interaction types where enough data is available, we see that differences within species are much larger than between species. For example, in both mangabeys and the two chimpanzee groups, spatial proximity is much less consistent than grooming or aggression partner choice - and as in our previous paper, mangabey spatial proximity is highly unpredictable. Aggression and dominance interactions did not differ between the two species in terms of consistency. Grooming, on the other hand, was more consistent in mangabeys than in chimpanzees, indicating higher levels of flexibility necessary to track grooming interactions in the latter.

Over the years, our work with the mangabeys has also led to more insights into the biology and behaviour of these fascinating and understudied primates. Jan Gogarten and colleagues could show that group membership and kin relations influence how similar the microbiomes of individual mangabeys in our group are (Gogarten et al. 2018), and that pathogen-carrying flies follow the mangabey group around over relatively long distances (Gogarten et al. 2019). In two upcoming papers, spearheaded by Clement Gba, we show that mangabey males have an important impact on feeding competition in the community, and that high-ranking individuals are more likely to be in the centre of the group and therefore spend less time being vigilant and more time eating. All in all, with now 7 years of longterm behavioural and genealogical data and a large number of biological samples available, our mangabey groups is a thriving environment for future research on primate sociality and biology.