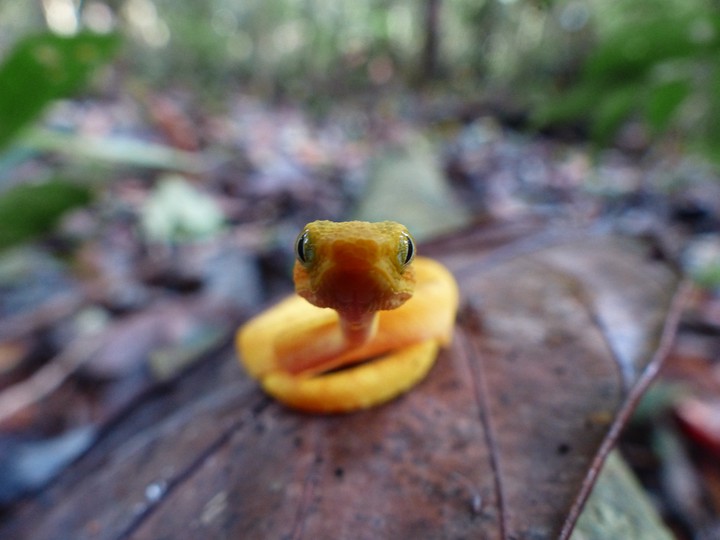 My research has focused on communication, its function, and the development of new methods and theoretical frameworks throughout my career. I started by programming an algorithm, based on neural networks, that could be trained to identify individual blue monkeys by their alarm calls, and also tell apart different call types and species (Mielke & Zuberbuehler 2013). We subsequently applied the same method to learned orangutan vocalisations, showing the Rocky, an orangutan in Indianapolis Zoo, had learned to make ‘wookie’ sounds that were distinct from any other vocalisation in the orangutan repertoire (Lameira et al. 2016).

As part of my PhD, I scared sooty mangabeys with (relatively) life-like models of Gaboon vipers, made from paper mache. Besides being wildly entertaining, this study allowed us to test different theories of how cooperative alarm calling evolves. Gaboon vipers are a threat to sooty mangabeys, but only as long as you don’t know where the snake is hiding. Monkeys do not actively chase off the snake, as they do with leopards or eagles. Therefore, if a monkey calls, it is probably to inform others. But whom do they inform? Our results show that mangabeys did not call specifically for family members, friends, or ignorant group members; instead, they called when the information about the location of the snake would otherwise be lost to the group. We saw a lot of calls when individuals were around the snake in small groups, but not when they were in large groups. Thus, we concluded that the social system of these mangabeys, living in large well-connected groups, reduces the responsibility for each individual. They do not have to wait around the snake, and not everyone has to call; as long as you are alone with the snake and you call, all subsequent individuals will be informed, and you can be on your way again.